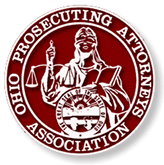 In every case of conviction, the prosecuting attorney shall cause execution to be issued for the fine and costs, and faithfully urge the collection until it is effected or found to be impracticable to collect, which money shall be paid into the county treasurer.

The prosecuting attorney may participate as a member of the investigatory staff of an organized crime task force that has jurisdiction in that county, in an investigation of organized criminal activity under Ohio law.

The prosecuting attorney shall be the legal adviser for all township officers in the county, except in limited situations.

Organization of the Prosecuting Attorney's Office

While still a small office compared to other counties in Ohio, the Fayette County Prosecuting Attorney's Office is organized into six main divisions: Criminal, Juvenile, Civil and Government Services, Appellate, Victim Services, and Administrative. At present, the office has three attorneys, three clerical staff, and a victim services provider.

The Criminal Division has the responsibility to serve the criminal docket of the Common Pleas court in the prosecution of all its criminal cases. It also addresses issues of extradition, bindovers from the County Municipal Court, and post-conviction relief.

The Juvenile Division has the responsibility to serve the docket of Fayette County's Lone Juvenile Court. It addresses delinquency, traffic, dependency, neglect, and unruly cases as well as adult and permanent custody cases from the county's children's services.

The Civil and Government Services division has the responsibility to serve the civil docket of the Fayette County Courts in which the county, any of its boards or the county townships are a party. As well, the division represents these clients in all administrative law matters, bankruptcy and collections, and taxation. The government services function is to advise and assist all county officers the various county boards and township officers in carrying out their duties. This includes attending meetings, reviewing contracts and rendering opinions.

The appellate division handles all appeals from the courts and boards of the county and criminal courts. The division initiates and responds to appeals that are filed in the 12th District Court of Appeals for Ohio, The Ohio Supreme Court, Federal District, the Sixth Circuit Court of Appeals, and the United States Supreme Court.

The Victim Witness Division has the responsibility to aid and assist the victims of crime in overcoming the adverse effects of their victimization from cases originating in the Common Pleas Court and the Juvenile Court.

The administrative division has the responsibility of supporting the office in its daily functions. Supplying all other divisions with needed supplies and data entry support. Further, the division forecasts the needs of the other divisions and attempts to meet those needs in a timely manner.